Europeans are positive about ageing
What are you searching for?

Europeans are positive about ageing

We are living longer and an increase in the average lifespan will mean an increase in the number of older people in the population, many of whom will live to a very advanced age. Calculations suggest that the average lifespan in Sweden by 2050 will be 86.2 years for women and 83.6 years for men, although others have suggested that the average lifespan may be even higher. An ageing population creates new demands on society, when other demographic changes are already having knock-on effects on the economy, society, and the medical care sector. Ageing in today’s society also imposes new demands on our elderly. 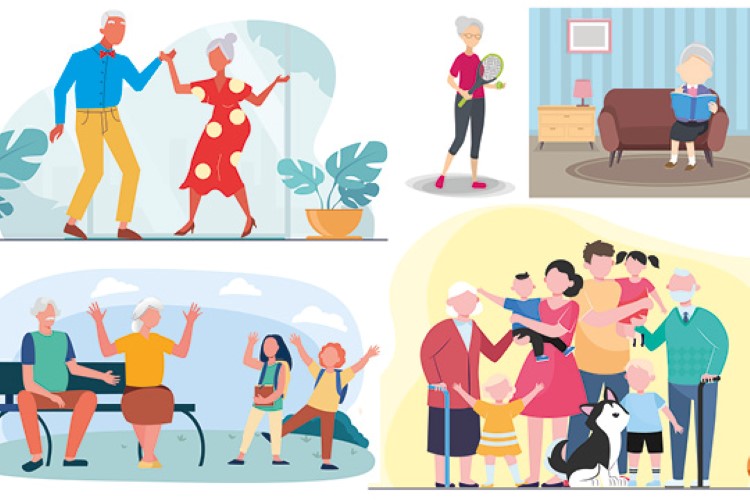 Ageing comes with numerous physical and mental changes at a time when society itself is changing more and more rapidly. Physical and mental health has a direct link to a person’s ability to take on board innovations and changes, such as society’s continued digitalisation. As we age, our potential for physical activity, socialisation, and meaningful employment – factors which research has shown are vital to our wellbeing and healthy ageing – decrease.

But what is it actually like to age in today’s society? Which factors do the elderly regard as particularly important and how are today’s seniors affected by physical and social changes? In the spring of 2020, Doro conducted a survey amongst over 65s in order to investigate, amongst other things, their attitudes towards their own health and ageing. The survey was carried out in Sweden, Germany, France and the UK, and the results suggest both positive developmental trends and challenges worthy of closer examination.

Overall, the results were heartening, with seniors having positivity and faith in the future, even amongst the oldest age groups. The one cloud on the horizon was the fear of going out alone. Many of those surveyed felt that the world has become a more unsafe place, and this is a fear that can lead to concerns and isolation. We, here at Doro, hope that the knowledge we have gained and the services we provide can help ensure that our elderly do not isolate themselves. We can help increase people’s feeling of security by making it easier for them to maintain contact with their nearest and dearest and ensuring that someone always knows where they are.

A selection of the results is presented below.

The majority (79%) of seniors believe that the opportunities to enjoy life after the age of 60 are much better than they were 20 years ago. Just over half (53%) also say that they are not afraid of ageing. Differences are apparent however between the various markets - seniors in France are more likely to say that they are afraid of getting old, while seniors in Germany are less likely to worry about it.

Most are happy with their lives

A clear majority (80%) state that they are happy with their lives and over half (61%) feel it is easy to find their place in today’s world. Seniors in Germany stand out from the crowd and are more likely than those in other markets to reject the claim that it is difficult to find one’s place in the world today. That being said, the majority (62%) of seniors also say that they miss their previous work routines and workplaces. This sense of loss is greater amongst the very oldest. Almost as many (65%) are also worried about their pensions, with more women than men being concerned about this.

The majority (77%) describe their physical health as good in terms of mobility, dexterity, sight, and hearing. The ability to write and hold things securely in one’s hand are both valued particularly highly (72%). Fewer than half (33%), however, state that their health is a hindrance to doing the things they love.

Two thirds are afraid to go out alone

The majority (69%) of seniors do not feel safe enough and consequently worry about going out alone. A comparison of male and female responses shows that women are more worried than men. Differences are also apparent between markets, with those in Sweden and France more likely to say that they are worried about going out alone. The majority (67%) also feel that today’s world is a much more dangerous place than it was 20 years ago.

The majority (71%) of seniors say that they do not feel old. Over half (58%) also say that they feel confident in their ability to take care of themselves if they were to have an accident. Seniors in Sweden feel slightly less sure that they can take care of themselves after an accident than seniors in other markets. Fewer than half (34%) are worried about their family regarding them as a burden as they age. Seniors in France are slightly more concerned that their ageing will be regarded as a burden by their family.

An active social life is regarded as particularly important

The corona pandemic has resulted in many valuable reflections and has taught us some important lessons. In the future, we will have to pay attention to the shortcomings, and reflect on the successes, of how society takes care of its seniors. With the help of welfare technology, our seniors can be given the right to age in a safe and dign...Read more

Many seniors live independent lives without wanting to rely on a relative or the health care system. They love to travel, meet friends and family, take walks outside and are determined not to be a burden to their family. Therefore, to be seen as “old” or “helpless” can be very detrimental for that person and to have to accept the help of others, is a big step away from that ind...Read more

Europeans are positive about ageing

We are living longer and an increase in the average lifespan will mean an increase in the number of older people in the population, many of whom will live to a very advanced age. Calculations suggest that the average lifespan in Sweden by 2050 will be 86.2 years for women and 83.6 years for men, although others have suggested that the average lifespan may be even higher. An ageing population creates new demands on society, when other demographic changes are already having knock-on effects on the economy, society, and the medical care sector. Ageing in today’s society also imposes new demands on ou...Read more

Reducing loneliness among the elderly

While the pandemic has affected all of us, few have been hit harder than the elderly. As a risk group, they have had to bear the brunt through months of isolation. But for many elderly the situation isn’t new; 600,000 elderly Swedes feel lonely even when there are no restrictions. It’s time to take action against loneliness, writes Carl-Johan Zetterberg Boudrie, CEO of the technology enabled care com...Read more

Technology can reduce loneliness among seniors

In these times of lockdown, shielding and social distancing, loneliness and isolation can increase. Often the vulnerable groups are hit the hardest, and we do not know for how long the pandemic will last or what the real consequences will be. Although we are living longer and more people are aged 70+, the lack of social contact is a real threat to the wellbeing of seniors. As the UN Secretary Antonio Guterres recently said: “The COVID-19 pandemic is causing untold fear and suffering for older people across the world. Beyond its immediate health impact, the pandemic is putting older people at greater risk of poverty, discrimination and i...Read more